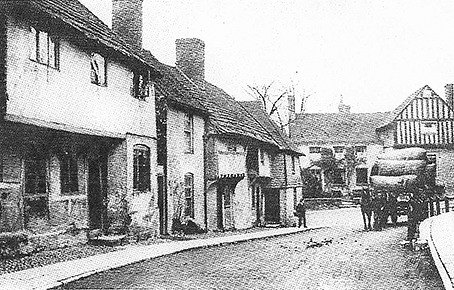 For many centuries Steyning’s fate was in the hands of outsiders. Alfred the Great owned the manor of Steyning and, until the Norman Conquest, it was the private property of the kings of England. Then, with the Conquest, it was granted to the French Abbey of Fecamp. They acquired the right to ‘have the land of Staninges with all its appurtenances and with all laws, liberties, free customs, quittances, pleas, plaints, and causes without any disturbance or denial of any secular or judiciary power’.

The Abbot, or rather his proctor, exercised lordship over the people of Steyning – most of whom were unfree. That is to say, in exchange for their homes and a limited number of acres, they were bound to their lord.

They had to pay to get their corn ground at the abbey’s mill, could not marry or leave their lord’s employment without his permission – both requiring payment in kind or in cash – and when anyone inherited their father’s land they had to hand over their best beast (known as a heriot) to the abbey.

They were also required to undertake a multiplicity of specific tasks on the manor’s lands without remuneration – ploughing, manuring, harvesting, threshing and winnowing the corn, cutting and carting the hay, weeding, hedging and ditching, washing and shearing the sheep and making cheese from their milk – and many more. Added to which there were taxes and tithes to pay.

So it was for 250 years. Then came the hundred years war and, effectively, the profits of the manor were switched to the crown but, apart from that, the people of Steyning would have noticed little change: the Abbot’s proctor, a black-garbed monk, was still the man in control.

It was the Black Death and succeeding plagues rather than the change of ownership which had the biggest impact on their lives.

Then, in 1413, Henry IV ended the Abbey of Fecamp’s tenure by giving the manor and all the other Fecamp possessions to Sir John Cornwall for his lifetime. It came as a dowry for his sister, Elizabeth, when she married Sir John. It was Elizabeth’s second marriage and a rather charming list survives of what she inherited from the Earl of Huntingdon, her first husband.

It included, amongst other things, his lance and shield, ‘six cloths of gold of divers colours’, ‘an old bed of baudekyn [a fabric with thread of gold and rich silk] with seven old tapets [curtains] of red tapestry’ but also ‘eleven towels, used and torn’. Similarly, along with ‘twelve silver dishes’, there was ‘an old frying pan’.

No sooner had Henry V come to the throne than he allocated Fecamp’s possessions and those of several other alien priories as an endowment for a new religious house he had decided to establish near Isleworth, which became known as Syon Abbey. It housed both nuns and monks but was always led by an Abbess.

However, it was only on Cornwall’s death in 1443 that Syon took full control of Steyning’s affairs. From that moment on, until the final dissolution of the monasteries in 1539, all fines imposed in the courts of Steyning went to ‘the Lady’ and the abbey exercised all the powers and privileges which Fecamp had enjoyed in earlier generations.

The privileges in question, amongst many others, included having the ‘view of frankpledge and court of Morowspeche [both medieval courts] within ye manor’ and having ‘the assize of bread & beere & whatsoever belongeth to the Clearke of the Market. And to hold two faires yearly within the said town’.

It sounded as if little had changed; but it had.
By the 16th century men and women in Steyning were no longer unfree and bound to work on the Abess’s lands.

Many continued to do so, of course, but they had a choice and were paid in coin of the realm. The grip of outsiders on Steyning was loosening.
Share this article