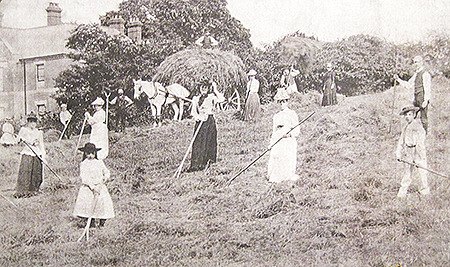 When William de Saon walked across the demesne farm of the Manor of Steyning in the month of June in 1338 he would have seen the hay fields, bright with wild flowers, the wheat, barley and other crops pushing through with the promise of a reasonable harvest and sheep and lambs grazing in the fields. His was the responsibility for checking and recording the income of the manor, its expenses and every single transaction made during the year – and he counted everything using tally sticks.

The hay fields were due for scything and, once cut and dried, haystacks would be built and thatched. Hay provided winter feed for the animals along with some of the oats, peas, grey beans and vetches which were harvested later in the year.

It was also in June that the major task of shearing the manor’s flock of sheep and lambs was undertaken. In this particular year the manor took 299 fleeces from their sheep and 285 from their lambs.

But then, for reasons we haven’t properly disentangled, every single one of these fleeces, with the exception of one put on one side for the shepherd, ended up with John Andrew, the reeve of Warnham, almost 20 miles distant from Steyning.

Why? The reason is that Warnham played an integral part in the manor’s farming year. As the seasons changed the manor’s flocks were moved between different grazing grounds – the chalk downland, the fields round Steyning itself and fresh pastures out at Warnham. It had even become part of Steyning Hundred, despite the fact that it was separated from its mother parish by half a dozen other parishes from different Hundreds. The strangest thing about this part of the account roll, however, is not the use of Warnham’s pastures but the fact that nothing is said about the value of the fleeces. They would have been sold but, whereas every other sale is meticulously recorded, down to 7¼ pence for 182 eggs, the fleeces are not mentioned. Whether they were omitted deliberately to hide the true income and minimise their liabilities to the crown, or because the record is lost, is unclear.

It was later in the summer, in August, when the 140 acres of wheat and barley had to be harvested, that the manor made special arrangements. The villeins, who held their cottages and lands from the manor in exchange for doing specific ‘customary day works’ on the demesne farm, put in extra hours known as ‘boon works’.

For most of the year the men employed to perform specific tasks such as Adam Wakelyn the hayward and the carter, were paid with an allocation of barley (usually 1 bushel a week) but during ‘the two weeks and five days’ – which was the period during which they helped to bring in the harvest – they received cash payments, but no barley. Moreover, the manor paid 1½ pence a day to a specialist ‘haystacker’.

The manor also got help from the neighbouring communities of Charlton, Wiston, Wappingthorne, Ashurst and Wickham. Their tithing men, the leading men in their little communities, were paid a retainer and an extra 1½ pence a day for days worked. Thomas de Hyen, the tithing man of Wappingthorne, worked for five weeks ‘before the [harvest] month and after’ and Thomas of Chancton was retained ‘for collecting sheaves in Steyning field for 2 days before the common table’.

This term, ‘the common table’, crops up a lot and always in relation to the harvest. At harvest time the men working in the fields ate at the expense of the manor which, for these 2 weeks and 5 days, allocated 5 quarters of wheat from their granary for the baking of bread for ‘the common table’. Five quarters of wheat would generate some 700 kilos of flour; that’s an awful lot of loaves.

All the intricacies of the manor farm’s finances for one year are laid bare in two parchment rolls, if we only knew how to interpret them. William de Saon did know and had no need to explain himself but, for us, it is work in progress.
Share this article