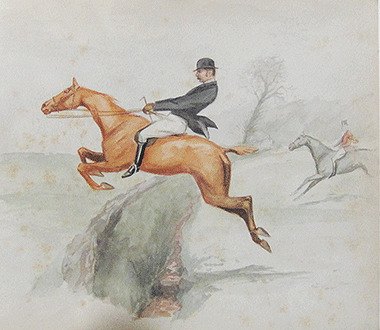 Museum Archives: Pursuits of the Past

Many of yesterday’s pursuits and pleasures would not have been to our taste. Indeed, quite a few would now be beyond the law.

Take cock fighting for example. Records go back into the Middle Ages when it was largely a country pursuit but Henry VIII had a cockpit built at Whitehall and James I is reputed to have attended cock fights at least twice a week. It was not until 1835 that cock fighting (and bull and bear baiting as well) was banned.

It must have been not uncommon in country towns and it was in 1757 that the Sussex Advertiser publicized an event in Steyning. ‘COCKING’ it said ‘On Monday next the 2nd May, will be fought at the Chequer at Steyning, a Main of Cocks between the Gentlemen of Horsham and Steyning, for Two guineas a battle and Ten the odd battle’. A ‘main’ was a match between a designated number of cocks on each side and, so far as we can understand, these were individual matches and the ‘odd battle’ was the final contest. It was principally gentlemen who bred the fighting cocks but, above all, it was an occasion for heavy betting.

A sport (for which there are still enthusiasts) was boxing but when a bout was held at Steyning’s Fair in 1788 it was a bare-knuckle fight and was clearly a hazardous occasion because ‘Thomas Standen, a bricklayers apprentice, on Monday died of the bruises he received in parting two men who had engaged in a boxing match at Steyning Fair. The Coroner’s Jury sat on the body, and delivered in their verdict, Accidental Death.’

There is even a hint of the sport for which Steyning became well known during the 20th century – race walking. In 1810, at a time when Steyning was still home to as many as 1000 troops billeted in barracks in the vicinity of Castle Lane, ‘An officer undertook, for a wager, to walk from the barracks to the Old Ship Tavern in Brighton, a distance of 11 miles, in two hours, which he performed with ease, five minutes within the time’.

Yesterday’s ‘pursuits’ could, of course, be actual pursuits. Fox hunting is a case in point and there is a newspaper report of a hunt that swept through Steyning in 1791.

‘On Saturday se’nnight Lord Egremont’s fox-hounds unkennelled a fox in a furze field near Wigginholt, from whence he took his course to Storrington, where he crossed the church-yard, headed eastward, and ran through the town of Steyning into the church-yard, reconnoitered for a while and then proceeded to Bramber where he also crossed the church-yard; headed and ran to Shoreham, from thence to Applesham and lastly to Highdown where he leaped gallantly through the window of Sir Harry Goring’s house and, after a most excellent and diverting chase, was taken alive from under the dresser where he had skulked for shelter’.

Fox hunting along with the hunting of hares was banned in 2004. In the past though, hunts would meet frequently during the autumn and winter when there was least chance of damage to crops. But it was only the unusual hunts which were reported – such as the occasion when a hare almost gave Steyning’s hounds the slip. ‘A few days since, as the Steyning hounds were trailing through Treakles Wood, they found a hare which gave them a hard run to Heath Common where, puss being exhausted, sought for shelter under the roof of a cottager, who instantly killed her and concealed her under his bed; but, in doing so, he was not aware of the danger, for the hounds, soon coming up and the scent of the hare being strong on his person, seized him.

Had it not been for the fortuitous appearance of the huntsman who found him in a very perilous situation, the consequences might have been fatal.’

However much we might now deplore the things which gave our ancestors some enjoyment, they were a part of their lives and a part of our story.
Share this article