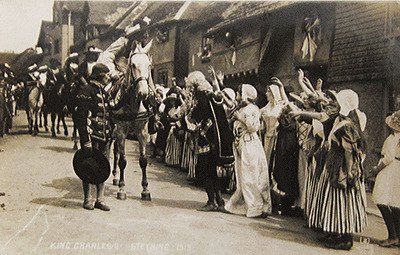 In the days when the focus of the British film industry was on Shoreham Beach, Steyning was chosen as the principal location for the filming of a story about Charles II’s escape after the battle of Worcester. The story, on which the film was rather loosely based, was a romantic – and improbable – adventure novel called “Ovingdean Grange” by Harrison Ainsworth.

So, on one July day in 1913, Steyning swarmed with cavaliers and roundheads and, according to press reports, ‘Thirty one actors and actresses well known in the cinematograph world with, altogether, some 300 people... Not a little of the entertainment for the crowd was derived from seeing folks well known to them swaggering about in military attire or the dresses of the period’.

Amy Hole, when a small girl, recalled the occasion. In a conversation with us, some years ago now, Amy told us that her mother had been able to earn enough money, as an ‘extra’ in the film, to provide her numerous children with new shoes for the very first time in their lives.

It was a story in which all the cavaliers were dashing and all the puritans were sinister – and in which most unlikely things happened. In a scene filmed in the White Horse taproom, said the press report, ‘King Charles and Colonel Maunsell were disguised as drunken sailors and his majesty had to undergo the indignity of being hidden in a barrel’.

Elsewhere a puritan spy who had briefly captured the king ‘was dipped in a duck pond, spread-eagle fashion – a performance which, when enacted to meet the demands of the cinematograph, also provided much fun for the latter day onlookers’. We don’t know where this took place but we do know that ‘at Gatewick Farm was enacted the incident of the oak tree’.

To recreate the Battle of Worcester, the big set piece episode in the film, ‘a great battle raged on the Downs above Steyning’ – and there is a curious sidelight on this, reported by Geoffrey Malins, a filmmaker.

Facing a different sort of battle, he was with a group of officers in the trenches at the Somme in 1916, ready to film the action there, when the following conversation took place.

‘Are you going to give me a good show’ Malins asked them.‘You’re not coming after us with that affair [his bulky camera equipment], are you?’‘Yes, certainly. As soon as you get into the Bosche trenches I shall be there’ Someone piped up ‘Tell brother Fritz if he gets out of ‘the limits’’ ‘Where have you heard that?’ asked Malins ‘Limits’ is a technical term’‘I heard it once a few years ago. Filming was going on at a small place called Steyning. About 200 horsemen and an immense crowd were rehearsing a scene for the Battle of Worcester. It was some fight. The cameraman was constantly shouting ‘keep in the limits’ (I assumed he meant the angle of view). Everything went well until a section of the men, who were supposed to run away, got a few genuine knocks on the head, and continued fighting. It was the funniest thing.’ ‘That’s extraordinary’ said Malins ‘I was the chap who filmed that scene. I remember that incident well.’

They even used Church Street as the setting for filming Charles’ triumphant return to England in 1660. ‘His majesty comes along smiling and bowing.’ said the press report ‘Maidens bestrew roses in his path. His majesty’s horse is a little restive but he holds his steed serenely and rides on.’ That, however, was not entirely truthful. Amy Hole told us that what actually happened was that the actor taking the part of King Charles was, in reality, a very indifferent horseman and far from holding ‘his horse serenely’ he was not able to stop it backing into a shop window and breaking it.

Life wasn’t often this exciting for the people of Steyning. Memories of those days of filming must have stayed with them for years.
Share this article