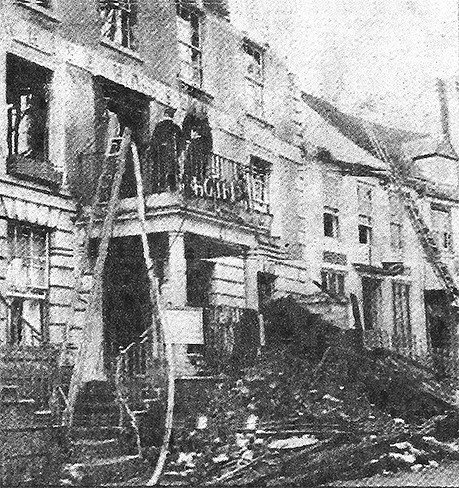 Sunday 20th March 1949 dawned cold, and frosty. Water from the fire brigade’s hoses which covered the ground in front of the White Horse had turned to ice, and policemen were busy sanding the pavement and road surface so that the firemen could continue about their business. The fire, which had raged through the small hours of the night and had left the White Horse Hotel a smouldering and gutted ruin, had been brought under control leaving only a strong smell of burning and hot timbers which, from time to time, still flickered back into life.

It had been a hot night. At 2 o’clock in the morning the only visitor staying at the Hotel had woken to find smoke filling the corridor and the sound of flames. He hastened to wake the hotel’s manager, Mr. Lewin, and his wife and children, who in turn woke Jack Barrasford, the barman, and his wife and the hotel’s maid. They all rushed out into the freezing night in their nightclothes.

Jack Barrasford ran to the police station to raise the alarm, at which point Mr. Lewin, thinking him missing and possibly still in the building, dashed back inside. Shouts told him that Jack was safe, so he made his hazardous way back to the street by stairs that were already in flames.

The members of Steyning’s fire brigade, who had been raised from their beds having spent much of the previous evening at their annual dinner held at St. Andrew’s Hall in Jarvis Lane, quickly brought the fire engine from its home in the Chequer Yard and began to direct their hoses onto the fire.

They were familiar with ‘firefighting’ at the White Horse because their standard test to check the water pressure through their hoses was to squirt them over the roof of the tallest building in the High Street which, at that time, was the hotel itself.

Despite this and despite the help they received from fire engines which joined them from Storrington, Henfield, Partridge Green, Southwick and Worthing, they were not able to save the hotel.

It had been built as a smart addition to the old coaching inn in the 1790’s. It had a party wall with No. 25 High Street beside it and there the Ruthven family, who had moved in only a short time before, and had just completed redecorating prior to opening as a café the next day, were disturbed by the commotion and, seeing their neighbour’s bathroom window a solid mass of flames, they too made good their escape.

It was great good luck that it was a very calm night. All the houses on that side of the Street are joined together and, in their attics, there is little to stop flames spreading. A wind from the south or east would have made it difficult to prevent a more disastrous conflagration.

As it was, young Peter Ruthven recalls the intense heat in his bedroom up against the party wall and that the firemen had to break through from No. 25 to contain the fire; water went everywhere and the family’s dreams of opening their café the next day were dashed.

A small silver lining was the way Steyning rallied round. As the fire raged a neighbour offered beds to the Ruthven’s children for what remained of the night and at 6 o’clock Grays, the outfitters, opened up to provide clothing for all those who had had to escape in their nightclothes.

Only the front wall of the hotel remained reasonably intact and, when a quote of £30,000 for the rebuilding of the hotel in the same style was submitted – at a time when a small house in Steyning would have cost less than £2,000 to buy – it was deemed to be too expensive and was rejected.

Although the White Horse was able to open a bar in an undamaged building behind the hotel the next day the saddest sight, according to locals, was to see barrels of spoilt beer being tipped away down the slope of the High Street!