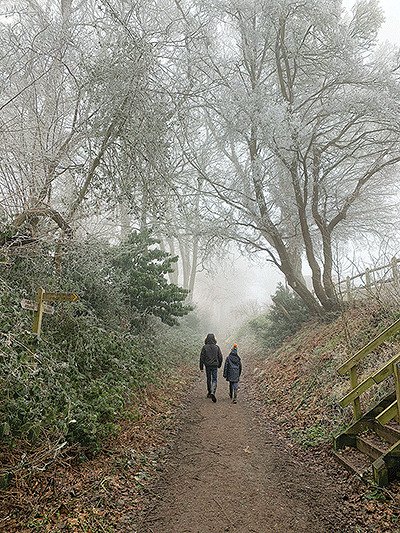 Winterwatch have been emphasising the importance of bio-diversity for well-being. Listen to their SOUNDSCAPES FOR WELL-BEING via their website and fill in the questionnaire about how you feel before and after.

An enormous thank you to the WILSON MEMORIAL TRUST for their generous grant which will help us and the community to plant even more trees and hedges this year where they want, to help fight against climate change – and for biodiversity.

We also want to thank the STEYNING SOCIETY to whom we are affiliated for all their invaluable help and knowledgeable support. The Chairman, Tom Aubrey, has now arranged for SFT to have a permanent slot for a talk in May each year. They helped us get our constitution and charity status.

They host our website and give us technical support and even help with funding applications when we are snowed under.

The Good News:
The Woodland Trust has pledged to plant 50 million trees by 2025 – LET’S HELP THEM.
Sir Charlie Burrell`s (the owner of Knepp) inspirational talk on `Wilding` produced by the Friends of the South Downs, attracted an audience of nearly 500 local people.

He said that after only 15 years there was an amazing increase in mammals and species and radical recovery of the soil. They reached a record for breeding songbirds in the UK. He spoke about the importance of green bridges over Motorways, Climate Corridors and especially hedges and how more trees can be created by natural renewal.

His wife, Isabella Tree`s book `Wilding` is available from our excellent Steyning Bookshop – much better than Amazon!

GREENING STEYNING is starting a GREEN Books Bookclub with some interesting subjects to be covered.

Sir Partha Dasgupta, Emeritus Professor at Cambridge has just released his report ‘The Economics of Biodiversity’ commissioned by the last government.Basically saying “we are trashing our home”, echoing and supporting Greta`s “Our house is on fire” He says “Nature is our home - good economics demand we manage it better”)

Why plant trees and hedges?
• 80% of birds rely on hedgerows for their food in winter.
• Rosehips has the same amount of vitamin C as 40 oranges.
• Ivy has the same calorific value as chocolate - Ref: Winterwatch.
• 178 million hectares of the world`s forests have been lost since 1990.
• WWF estimates 50% of species are at risk of local extinction if no action is taken.
• Climate change could force more than 140 million people from their homes by 2050.
• Trees reduce flooding.
• Trees help to cool cities and urban areas

New Projects for 2021:
We hope to be able to work with the following organisations and individuals in 2021, Covid-19 allowing, and thank the people involved who are going to make all this possible:

This is, in addition to all our supporters in the areas already planted, who worked so hard last year to get us started.

They are all on our ‘Roll of Honour’ which we will have at the Market on 1st May.

Many thanks to all the people promoting tree planting, this is a great community effort. It is good to be co-operating with so many Steyning groups and individuals who are keen to see more trees and hedges in and around Steyning to help in the fight against climate change.
Share this article