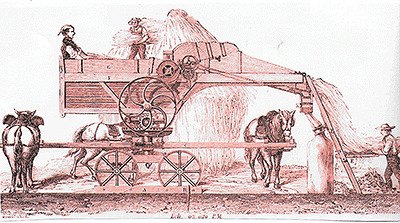 As the autumn of 1830 moved towards winter more and more Sussex people would have looked out at night to see a glow in the sky from a burning barn or rick. They had been deliberately set alight.

Farm labourers were using arson, among other things, to intimidate farmers. The unrest had surfaced first in Kent at the end of August and had spread throughout Sussex.

During the third week in November it came close to Steyning. In Findon a stack of oats was burnt and the ‘town engine’ was sent from Worthing to put it out.

Then, on the following Monday, a barn was ‘fired’ at Sullington and, at Fulking, an anonymous letter was nailed to a stable door threatening to ‘burn down your barns and you in them if you do not pull down your messhines and rise the poor mens wages’.

This is what it was about. The rural poor were underpaid and, said Gideon Mantell at the time, ‘in a state of ignorance and slavery: almost starving’.

The harvests of 1828 and 1829 had been dreadful and landowners began to bring in Irish labour which undercut local workers’ wages at a time of the year when they should have been at their highest.

It coincided with falling agricultural prices which also led to pay cuts. Moreover, many farmers no longer allowed their workers to glean left over crops and grain from the fields, a customary benefit that helped tide them over the winter.

On top of that the clergy insisted on the continued payment of tithes. But the ultimate trigger for the unrest was the growing use of threshing ‘messhines’.

Threshing with flails kept men occupied through the winter months and, when replaced by machines, they had no employment to fall back on. In those miserable conditions they were often forced to accept parish charity in the workhouse.

So, the targets of the rural poor were the farmers, the landowners, the parish priests and the Guardians of the Poor. The labourers’ activities were not co-ordinated, but they became known as the Swing Riots because many of the threatening notes left for farmers were signed ‘Captain Swing’, an imagined name with echoes of swinging flails or swinging from gallows.

In Steyning, on Saturday 20th November, a ‘clamorous crowd’ of some 100 men gathered, demanding wage increases, which they were promised, and a reduction in tithe payments.

The men then moved on to Beeding where, after forcing the Reverend Ventris to join them on a pub crawl, they compelled him to ‘materially lower’ his tithe demands.

Down the road, in Lancing, ‘a ‘mob’ of 30-40 labourers visited the house of Mr. Penfold, a churchwarden, calling for the poorhouse to be demolished and for the daily wages to be increased to 2/6.

Upon being met by Colonel Lloyd, a magistrate, they refused to disperse, prompting the Riot Act to be read: however, an attempt by the constables to seize the ringleaders was bitterly resisted, the Headborough [a town official] being attacked in the affray.

Only the arrival of the Coastal Blockade restored order’. ‘By the next morning’, said the Sussex Advertiser, ‘the men were back at work as if nothing had happened’.

The threats did work. Farmer Tilly at Thakeham was so terrified of a visitation by a crowd of determined labourers that he voluntarily destroyed his own threshing machine. Increases of the winter wage from 1/9 per day to 2/3 (and 2/6 for the summer) were demanded and often granted.

The vicars were more difficult to persuade but the farmers, who would also benefit from a reduction in the tithe, sometimes sided with the labourers. No workhouses were burnt but on one occasion the grindstone, on which they earned a meagre 9d a day, was destroyed.

The sad thing is that, when the unrest died down, the promises of higher wages and lower tithe payments were largely ‘forgotten’.
Share this article