New Film Launched: The Making of a Nature Map

There were three of us standing on the rim of the quarry pit that cuts into the side of the Bostal Road as it climbs to the top of the Downs, just above Steyning.

The early morning, low, grey, cloud had lifted and the sun picked out yellow clumps of cowslips pushing up through the young grass around us. To the east lay soft rolling farmland. Behind us, the sea and the Rampion wind farm and in front of us lay Steyning, Bramber and Beeding in the shadow of the Downs, perched on the edge of the Weald.

The perfect day and place for a video shoot. 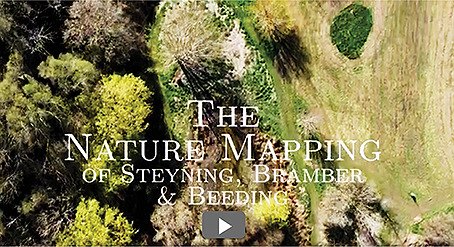 You can view the film at: https://bit.ly/steyningnaturemap
So, there was Phil Birch setting up his video camera. Phil had agreed a few months earlier to make a film about the amazing place in which we live and why and how Greening Steyning’s Biodiversity Group had created a nature map of it. Forget houses and roads, the map displays the different habitats; chalk grassland, woodland, streams and rivers, wetlands, and farmland, that can be found here. Habitats that are important to the wildlife that we share our lives with.
Then there was Roger Brown, just one of the dedicated volunteers who spent last summer surveying the area in and around our three villages; identifying and recording the habitats he found.

With a paper map, a handful of coloured pencils to fill it in, a standard key to denote the different habitats, a plant identification app on his ‘phone and a partner to help, Roger produced one of the six maps that covered the whole area we chose to survey.

At the end of the summer these maps were put together by a magician called Nick Quin who then turned them into the digital interactive map that now sits proudly on our website. For his part in this, Roger was about to become a ‘star’ in Phil’s video about the making of our Nature Map.

The map which was launched on our website on Green Day at the Steyning Festival is a tool that the Biodiversity Group can use to carry out its aim of improving our local biodiversity. It is a baseline, a record of what we have now in terms of habitats to help us plan the changes that are needed to secure the future for our wildlife.

But the map is more than a tool for us to use. It is something that we want to share with everyone. By simply logging on to the Greening Steyning website, anyone can open up a new world and look at the place where we live in a different way. You can discover where there are areas of important chalk grass land, read the notes attached and find out what is growing there. Click on a different layer of the map and you can see where all the orchards grow. The video we were making that day on the Downs brings the map alive. It is an invitation to go out and explore the remarkable place in which we live and maybe even join those who are trying to protect and improve it.

Watch it, be inspired, and check out our map! 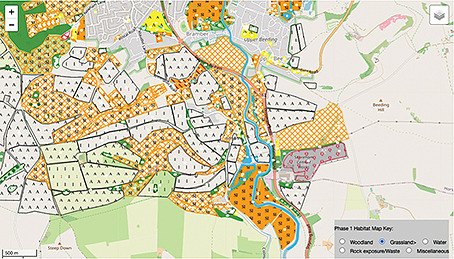 You can find the interactive Nature Map at: https://bit.ly/naturemaplive