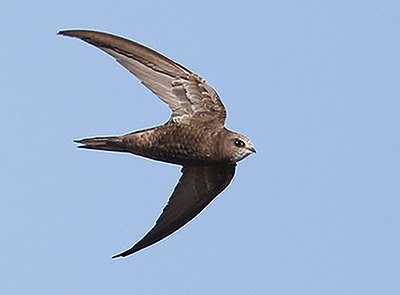 They arrived on the 5th May, on the back of a storm that gusted up to eighty miles an hour, striped new leaf off trees, and brought down garden fences.

They were the first to return to our area this year. A handful of Swifts; six, maybe eight cutting through the air against a cold blue sky above Saltings Field on the edge of Beeding, just below the bank leading from St Peter’s Church across the water meadows to the river.

Definitely Swifts. Swallows have a blue sheen to their bodies with white underparts and House Martins lack the forked tail. These were dark brown with a forked tail and in flight appeared all black as they made long sweeping glides across the sky, swooping, cutting and turning through the air, living up to their name.

These birds, flying across the water meadows on the edge of Beeding, have one of the longest migration journeys in the world; they travel a round trip of 14,000 miles every year from Southern Africa, through France and Spain to arrive on our doorstep for a short spell, nesting and breeding, gracing our skies and filling our heads with their piecing cries, until they leave us in mid-August for the return journey.

Swifts are fast, just keeping within the speed limit at 69.3 mph. From the moment the young fledge, exit the nest and take their first tentative beats of their wings, they spend their entire lives in the sky. They feed, sleep, bathe and mate in flight. The insects they catch are collected in the back of the throat in a special food pouch, bound together with saliva into a bolus which they eat or carry to their young in the nest.

They catch raindrops in the air or by flying over water, skimming mouthfuls from the surface. They switch off half a hemisphere of their brains to sleep.

They are also in serious trouble. Between 1995 and 2016 their numbers plummeted by 53%.
Why? Loss of habitat or more specifically nesting sites have played an important part in their decline. In natural surroundings Swifts will nest in trees, cliffs and banks but in urban areas they look for space under the eaves of old houses and churches, tucked safely away out of sight.

Since the 1960’s house design has changed and few modern houses have eaves whilst older buildings are not renovated with Swifts in mind.

Falling numbers of insects due to climate change, habitat loss and the use of pesticides has also taken its toll on our Swifts.

All in all, the future for these birds looks bleak. Which is why Greening Steyning feels they need our help.

We want to protect current nesting sites by making people aware of where they are and expanding existing colonies by putting up swift boxes in areas where we know they are nesting.

Greening Steyning’s Biodiversity Action Group is planning a survey of our local swifts in the Steyning, Bramber, Beeding area in June and July when returning young birds are actively looking for nesting places.

The birds can be counted as they fly past prospective sites brushing or ‘banging’ the entrance with their wings. Resident birds respond by coming to the entrance and screaming; hence their nickname; Devil Birds.

Nest sites will be recorded and then we can plan where we would like to put new nest boxes up in the autumn to encourage more birds into the area.

The boxes have to be four to five meters off the ground to help young birds fledge. They need to be close to the eaves, face north, north-east or east, shaded and cosy with a clear flight path in. To entice new occupants, swift callers will be installed.

We need your support with this project.
We can all play a part in protecting the Swift’s food supply by restricting our use of pesticides and providing wildflower areas for insects.

We will need to raise money to pay for the boxes and of course we need those tall, suitably placed houses whose owners would welcome well behaved lodgers.