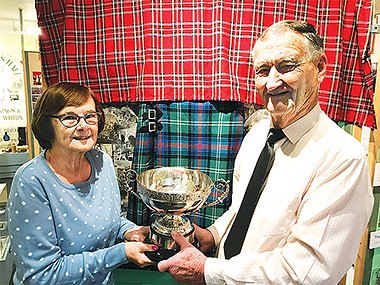 To celebrate his 88th birthday, Colin Gray, a long-time resident of Steyning, has presented the George Gray Rose Bowl to Steyning Museum. Muriel Wright, Chairman, was delighted to accept it on behalf of the museum.

This beautiful trophy was named after Colin’s father who lived in Dacre Gardens, Upper Beeding and was the founder of the Steyning Reel Club which met weekly at the Steyning Railway Hotel.

In the 1950’s Scottish dancing became so popular that members often put on outdoor demonstrations in Brighton and other local venues.

The George Gray Rose Bowl will be a focal point in Steyning Museum’s new display on Upper Beeding which will be open to visitors until the end of May 2022.
Share this article